The Häfele Group (Häfele SE & Co KG) is a German family enterprise with its head office in Nagold, Germany. Häfele is the leading international manufacturer and supplier of furniture fittings and architectural hardware, with customers in more than 150 countries.

On December the 1st of 1923, the merchant Adolf Häfele, together with Hermann Funk, founded the business "Products of the hardware and tool industry" in Aulendorf. 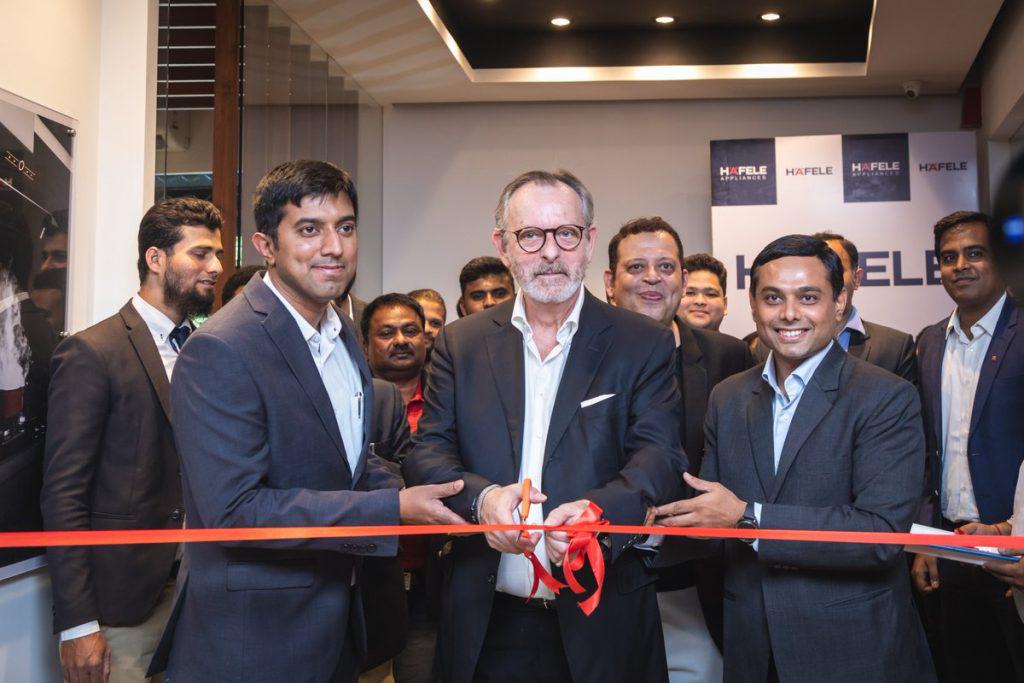 Four years later this became a sole proprietorship with Häfele as sole owner. A few months later, the company moved to Nagold, which was then the centre of Württemberg furniture production.

At that time Häfele had three employees, customers were mainly carpentries in the surrounding area. In order to guarantee fast delivery, a wholesale warehouse was set up.

The first exports to foreign countries were in 1933, in the same year the company was awarded the Golden Medal for the design of the exhibition stand at the Strasbourg Fair. Shortly before the end of the decade, the first furniture fittings catalogue appeared with a circulation of 20,000 copies, which was referred to as the "World Globe Catalogue" because of its title page.

In 1948, the Adolf Häfele company celebrated its 25th anniversary and the number of employees was 29. Four months later the company founder died. His nephew Walther Thierer took over the management. A major fire destroyed the administration and warehouse in 1950, and it was not until a year later that the company was able to move into its new premises.

In the following 30 years the company grew to up to 700 employees, with whom an annual turnover of over 150 million DM was achieved, and expanded its sphere of activity to 120 countries. Sales subsidiaries were founded in Switzerland, France, Great Britain, the USA and Australia. In addition, the company was distributed among four production companies in Germany.

After the death of Walter Thierer in 1982, Hans Nock, until then export manager, took over the management of the company. Until 2003 he managed the company, which during this time grew to 2900 employees with a turnover of 534 million euros, and the share of foreign business in this increased to around 70 percent.

As Hans Nock's successor, Sibylle Thierer has been the third generation of the family to run the company since 2003. According to the company, more than 160,000 customers are served in more than 150 countries.

At the beginning of the 1970s, Walther Thierer developed a reference book for furniture fittings with 25,000 articles based on the model of his uncle's "World Globe Catalogue". In 1971 "Der Große Häfele" was published with a print run of 60,000 copies, followed two years later by editions in English, French and Spanish. A first catalogue for building and object fittings followed in 1981.

Häfele produces fittings in four plants in Germany, since 1983 also furniture connectors sold under the brand name "ixConnect", and since 2009 also lift fittings branded "Free" and sliding door fittings under the brand "Slido".

With effect from 1 September 2009, Häfele GmbH & Co KG together with Heinrich J. Kesseböhmer KG took over the lift fittings and sliding door fittings divisions of Huwil Werke GmbH and a production facility in Hungary re-branding the operation "FCC" of "Flap Competency Center" and the product line "Free".

Abroad there are sales offices in Dubai (since 1998), Lahti in Finland, Marousi in Greece, Hong Kong, Bolzano, Zagreb, Maia in Portugal (1999), Budapest in Hungary, Jönköping in Sweden (1999) in Kruševac in Serbia and Dar es salaam in Tanzania (2019).

Häfele has subsidiaries in Kreuzlingen, Switzerland (since 1963), Archdale, North Carolina, USA (since 1975) and Rugby, UK (since 1980). This was followed by the establishment of companies in Dandenong, Australia, in 1982, a year later in Burlington, Canada, and in Taverny, France, in 1985. In 1986 more were added in Kilcoole in Ireland and Lentate sul Seveso in Italy. In the following years, subsidiaries were established in the Netherlands (Apeldoorn, 1987), in Singapore (1988) and in Botany, New Zealand, in 1989.

A further expansion took place in the 1990s, when subsidiaries were established in Shah Alam, Malaysia (1993), Yokohama, Japan (1994), Bangkok, Thailand (1994), South Korea's capital Seoul, Manila, Philippines, and Serpong, Indonesia (all three in 1996), with a focus on Asia.

Other companies were also added on other continents, such as Madrid, Spain, in 1997, Querétaro, Mexico and Honeydew, South Africa (both in 1997), and then twice in South America: in 1998 in Piraquara, Brazil, and Buenos Aires, Argentina, in 1999. In the same year, the Danish Skive was added, followed by Wugu Shiang, Taiwan, in 2000, and Hof, Salzburg, Austria, a year later. Since 2002 there has been a subsidiary in the Polish town of Długołęka, followed a year later by Zele in Belgium and Mumbai in India. Beijing (China) and Turkish Istanbul were added in 2005. After that, daughters were born in Moscow in 2006, Ho Chi Minh City in 2007 and 2009 in Kulykiw in the Ukraine and in Timișoara in Romania.